Link available for this article 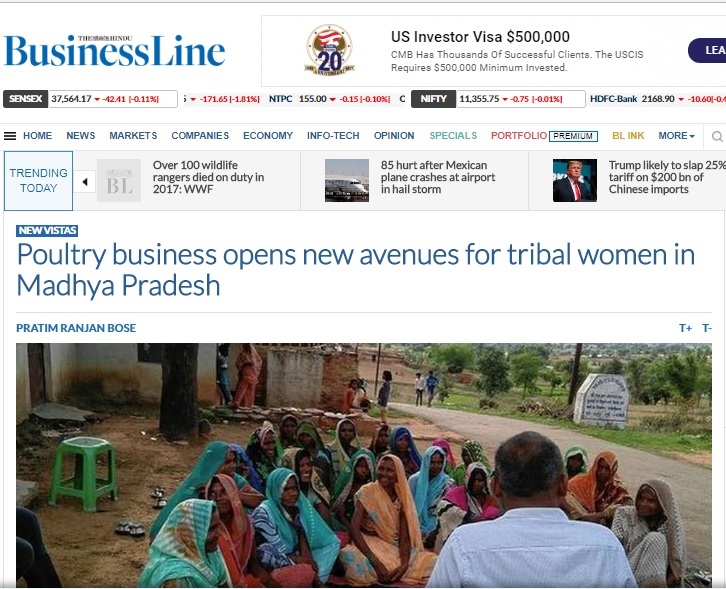 Support Officials meet member   –  of a

The 15-km journey from the energy hub of Singrauli to Bachnar, in Madhya Pradesh, opens up a beautiful panorama of forests, meadows, and hills. Till 2014, when she had set up a poultry farm in the backyard, Panmati used to take this road to Singrauli in search of a livelihood.

Panmati is a Gond, a forest tribe that once ruled Central India. Typical of the community average, she has six children, most of whom are school dropouts. Like all Gond families, they too grow maize during the rainy season, but do not have land records.

With Gond men devoted to their cultural tradition of drinking, women hop on to Mahindra pick-ups, the local conveyance, to work as daily labourers. Panmati and 25 other Gond women from Bachnar are now spared this, as they are making ₹3,000-3,500 a month by raising chicken in the backyard.

They have the financial support from the State or donor agencies, offering seed capital to set up a 500-sq ft farm in the backyard and meet working capital expenses. The farm grows 500 chicks for 23 days. MPWPCPL offers end-to-end support — right from supply of inputs, training, veterinary aid to procurement. MPWPCPL shares part of the profit with members as dividend and the rest is kept as reserve.

“The initiative is self-sustaining. We don’t have to come back here again,” said PK Sinha, Chairman of the Singrauli-based Northern Coalfields. The State-owned miner spent ₹2.5 crore in sponsoring seed capital to 200 tribal women, and is planning to expand coverage to 300 more women.

Singrauli is a new chapter in NSPDT’s books. The initiative has already changed the lives of 12,600 Dalit and tribal women, including 6000 in 11 districts of MP, 4,800 in nine districts of Jharkhand, 1,000 in Assam, 500 in Maharashtra and 300 in Odisha. Many of them expanded the farm size and earnings, says Harekrishna Deka, CEO, NSPDT.

The introductory effort was taken by the Delhi-headquartered non-profit Professional Assistance for Development Action (Pradan) at Kesla in MP in 1993. Today, the initiative meets roughly 30 per cent of the chicken demand in MP and 12 per cent of Jharkhand.

From the initial model of selling live chicken in the local market, State bodies in M.P and Jharkhand have already opened branded outlets — Sukhtawa in M.P and Swayam in Jharkhand — in select cities. The plan is to spread the outlet network across urban centres and sell processed products to enhance value realisation. A ₹6/7-crore mid-size processing plant is planned with support from the Australian government in M.P.

The biggest hurdle in this direction is finance. The front-end initiatives are capital intensive.

With barely ₹3-crore profit on ₹400-crore turnover last year, NSPDT cannot expect to make much headway on its own. With the flow of grants and soft loans reducing worldwide, NSPDT is mulling many options including access to PE finance.