Kalso Bai, Phoolwati Bai and Sukriti Chautele are poor landless tribal women in Madhya Pradesh. For years, they were dependent on backbreaking and often scarce work in the local sandmines or as daily wage agricultural labourers in neighbouring districts. Their children did without basic necessities such as adequate food, clothing and education. Today they run their own successful small poultry enterprises. They have life insurance policies, savings accounts and are able to send their children to school. They have taken and paid back loans from their self-help groups and local banks. How did they do this?

Akli Devi lives in village Ramatoli, in Palkot block of Gumla district. She is 42 years old. She lives with her family which comprises of her husband Jagdish Munda, three daughters and a son. She is doing well for her family and herself as a small holder poultry farmer. However she endured a lot of hardship before she started poultry farming. They were engaged in agriculture, wage labour and selling woods collected from the forest as source of livelihood. Agriculture was meagre due to lack of irrigation and resources. They collected other forest produce such as wild fruits and bartered them for grains and other items of necessities in the village. Providing education to children was a luxury they could not afford. 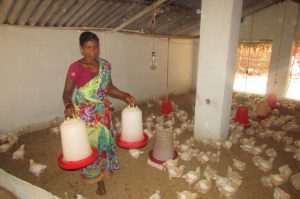 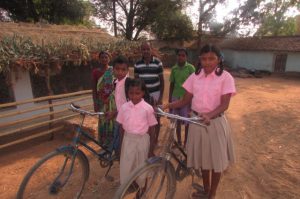 Their condition took a turn for better when Self Help Group was started in their village. She joined the group in the year 2001. The name of her group is Saraswati Mahila Mandal. Joining the group helped her save whatever she could manage and during times of distress she could withdraw small amount of loan.

Small holder poultry farming was introduced in her village to provide them with a sustainable source of livelihood. She too took this opportunity and this was a decision that changed her life forever. She took the membership of Gumla Grameen Poultry Co-operative Society ltd. and constructed a poultry shed in the year 2007 with the help of state government (MESO) project. She received a grant to construct a shed of 300 sq ft capacity. She started earning Rs 20,000 to Rs 25,000 through poultry farming. In the year 2009, she received financial assistance from RABO Bank Foundation of Rs 17,000 for expanding the capacity of her shed. She expanded her shed to another 300 sq ft and currently the capacity of her shed is 600 sq ft. She earns Rs 9,000 to Rs 10,000 per batch and approximately Rs 54,000 in a year.

They have no other source of income now. Her husband helps her in poultry farming and works as a wage labourer if he gets work nearby. Otherwise, the income from poultry was the limited source for them. They have now expanded their resources for agriculture with the help of poultry income and have enough food and grain for year round. They have 7 acres of land, out of which 3 acres are used for agricultural purpose. They sell grains and vegetable if need arises which is not very often.

They have two buffaloes and five goats. They have also bought 0.30 acres land in the village and have taken land on lease for farming. She bought other items such as almirah, bed, mobile phone etc. and invested in life insurance in LIC and have Rs 30,000 savings in her bank account. Her children are now studying in a private school in Gumla. She pays monthly fees of Rs 1,500 on education of her children. All of this has only been possible because of poultry farming.
Girja Bai lives in the village Rajgarh in Chhatarpur district of Madhya Pradesh.  She is approximately 43 yrs of age. In her family she lives with her husband, three sons and two daughters, both daughters are married. Before doing poultry the family used to depend primarily upon daily wage earning. The family used to migrate seasonally to Jammu and Delhi. Migration with entire family was the practice because they never had food security of more than three months from the agricultural produces as it was totally rain fed.

All her nightmare came to an end when she joined the village level SHG in the year 2007, and started doing broiler farming in her 400 capacity shed which was built with a grant provided under a Govt. program (MPDPIP) and became a member in the cooperative society. The scenario has been changed slowly and migration is stopped completely. Hence, she could take good care of her children and family. Previously her family could not afford to have quality foods, clothes, and buy books to their children. After entering into the poultry activity she can now manage the expenses of her child and her family. She feels happy and expressed her gratitude towards the activity.

She had expanded her shed capacity to 800 with Rs. 30,000 as financial assistance received from Rabobank Foundation. She could get her two daughters and one son married by the savings made through poultry.  She has taken a life insurance (PULSE) policy in her own name, in which she deposits premium of INR 6,000 yearly.  At present, she is earning INR 5,000 to 8,000 per batch of poultry of 25-28 days duration. She has invested INR 2, 50,000 in building a concrete house and purchased a plot of 3600 sqft. nearby.

She feels that poultry farming has entirely changed her life as her elder son did graduation in science and currently working with Rajnagar Grameen mahila Murgi Utpadak Sahakari samiti as Service Provider and earning annually around Rs.1, 00,000. Her married daughter is persuing her graduation, one son is in BA 1st Year. In the last financial year ended on 31st March, 2016, she made a total profit of Rs.43,970 from poultry.