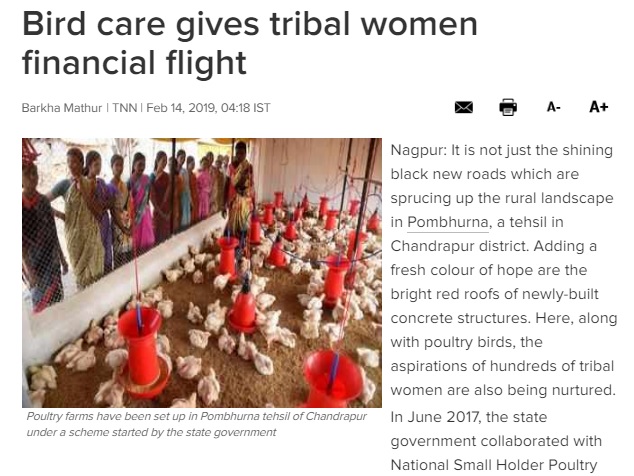 Printed from Nagpur: It is not just the shining black new roads which are sprucing up the rural landscape in Pombhurna, a tehsil in Chandrapur district. Adding a fresh colour of hope are the bright red roofs of newly-built concrete structures. Here, along with poultry birds, the aspirations of hundreds of tribal women are also being nurtured. In June 2017, the state government collaborated with National Small Holder Poultry Development Trust (NSPDT) and Tata Trust to form Pombhurna Mahila Poultry Producer Company Ltd. This provides an opportunity for tribal women to earn up to Rs6,000 per month from poultry farms built in their backyard. The farms are concrete structures fitted with containers holding chick feed and water. Measuring around 500sqft, they provide 1sqft space for each bird.

The government pays Rs1 lakh for the construction of the farm and Rs20,000 as capital money. “Of this, Rs5,000 are kept as working capital and remaining is used for training and administration expenses for a period of three years,” said Mangesh Udan, project manager who represents NSPDT.

The module which was previously implemented in Jharkhand, Madhya Pradesh and Assam, is designed to promote women as poultry producers. “They are organized in collectives of 500 to 1,000 members and are provided with chicks, feed, medicine, vaccine, technical support and round-the-clock para-vet services,” said Udan.

The birds when developed are picked up from the doorstep by the buyer. “The women are paid on basis of production efficiency in terms of broiler production,” he said.

The scheme was launched in December 2017 in three blocks of Pombhurna, Mul and Gondpipri, covering 1,000 households. Members are only SC/ST women who are needy as the income generation of up to Rs6,000 per month is for fulfilment of daily requirements. In the first round, 345 members were selected from 13 villages and in the second, 338 from 15 other villages. The remaining farms are still under construction.

Chicks take a period of 35 days to grow and gain weight of more than 1kg. They are then picked up from the farm by the buyers. Each member has done three such cycles, generating a monthly income of Rs4,000 to Rs5,000 which goes directly into their bank accounts. “Till January 2019, the turnover of the company was Rs3.34 crore and a profit of Rs20 lakh was made. Some part of the profit will also be distributed among the members while the rest will remain as reserve with the collective,” said Udan.

The scheme was initiated by the then collector of Chandrapur, Ashutosh Salil, and received total support of the guardian minister Sudhir Mungantiwar. It has cost the government Rs12 crore while Tata Trust contributed Rs3 crore.

“Tribals continue to be the most marginalized community and women more so. I see this project as a platform which will give more voice to tribal women, both in the family and society,” said Salil.

The women have already found not just a voice but a sense of purpose too. Kavita Madali, 34, at Sataratukum village has so far earned Rs9,000 in six months. “Previously, we used to go as farm labourers for cotton plucking,” she said. There was no money to spend on education and health, said Sarika Kove who has made Rs5,000 in a month. “With this income, I am hopeful that my two children will get education,” she said.

A 20-day training in poultry farming was imparted to these women. “It also introduced us to concepts of hygiene and proper nutrition, which has changed the way we live,” said Pratima Parchake.

The women have also acquired banking skills. “We are now learning to manage our money. Our effort is to leave it in the bank as savings, so that we can build a pucca house,” said Sweta Ade. “It is a lot of hard work too as we have to tend to the birds every 3-4 hours, mix feed and water and also clean the floor,” said Aruna Kowe.

But Salil said the women are very resilient and will sustain the effort. “This module has worked in Madhya Pradesh for the past 30 years and has been successful in Jharkhand too. Besides, this is a federation and professionals are present to steer them at every step,” he said